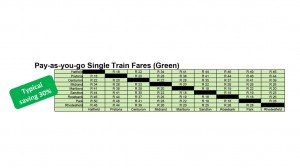 The green off-peak discounts were an incentive for commuters to explore flexible commuting hours.

GautrainÂ on Friday announced several revisions to its fare structure which will come into effect on Sunday, June 1.

TheÂ GautrainÂ would introduce a multitiered fare structure offering discounts of up to 30% between peak red and off-peak green train fares, while commuters in the intermediate orange period would enjoy a 10% discount from the peak red fare, explainedÂ Bombela Concession CompanyÂ operations executiveÂ Errol Braithwaite.

He said the increase in the off-peak discount was part of an ongoing strategy to grow overall patronage by incentivisingÂ off-peak travel.

TheÂ GautrainÂ systemÂ had been struggling with overcrowding during peak periods, as year-on-year train patronage had grown by nearly 30%.

Aside from the altered fare structure, options to extend parking facilities at Rhodesfield,Rosebank,Â Midrand,Â CenturionÂ andÂ PretoriaÂ stations were already being considered.

The change in fare structure was also being implemented in tandem with the introduction of additional train capacity during peak periods. On April 22 this year,Â GautrainÂ introduced another eight-car train in both the morning and afternoon peak periods to address growing demand.

Red fares would only be applicable during the morning peak hour (06:30 to 07:30), and also only in the peak demand directions, namely south-bound and west-bound.

The new structure would see orange fares increase by between 5% and 9% on the previous yearâ€™s standard fares, with the aim of making shorter trips more attractive.

The green off-peak discounts were an incentive for commuters to explore flexible commuting hours and would apply to pay-as-you-go fares where the commuter entered theÂ systemÂ on weekdays before 06h00; between 08:30 and 15:30; or after 18:00.

Period products would also continue to offer benefits to regular commuters, with trips on a 35-day ticket (44 trips) offering a 24% discount (on average), and those on a 7-day ticket (ten trips), a 17% discount compared with the red peak period fare.

Airport-service train fares were set to increase by R10 a trip, while the daily parking tariff would increase by R3, from R15 to R18.

The new fare structure aimed to promote balanced use of the trains, buses and parking facilities and to ensure that theÂ GautrainÂ remained price-attractive to its respective target markets, particularly private vehicle users, said Braithwaite.