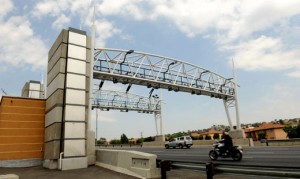 â€œThrough enhanced traffic flow and accessibility, the project will contribute significantly to economic growth,â€ he said.

Efforts to ease congestion on Gauteng’s freeways had to be welcomed.

â€œTransport is the backbone of the South African economy and there is a need for the country to improve its roads in order to meet the growing demands of the economy,â€ Motlanthe said.

He was speaking during the official opening of SA National Roads Agency Limited’s (Sanral’s) central operations centre in Pretoria.

The centre would be responsible for monitoring freeways, responding to accidents, and providing medical assistance and towing services.

High definition cameras were used to monitor tolled roads in the province.

Motlanthe said government was aware of the system problems around e-tolls.

â€œI am assured Sanral is doing everything possible to resolve these problems,â€ he said.

More than 1.2 million e-tags had been purchased.

â€œIt is only through projects such as the Gauteng freeway improvement project that we can progress and prosper.

â€œThe toll funding option allows us to bring projects to fruition that would otherwise not have been possible, had we solely relied on money from (the) fiscus,â€ Peters said. – Sapa