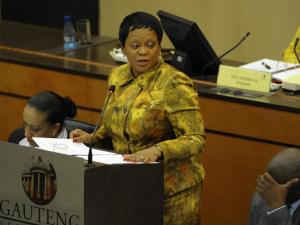 Gauteng Premier Nomvula Mokonyane was due to announce the upgrading of the N12 and N14 highways in her State of the Province address on Monday. File picture: Dumisani Dube

Johannesburg – The Gauteng government will spend R10 billion to widen two national roads in a bid to ease congestion and another billion to build a new suburb on the West Rand.

These are some of the major announcements Premier Nomvula Mokonyane was due to make on Monday in her State of the Province address when she opens this yearâ€™s sitting of the legislature.

The government will spend R5bn to upgrade each of the N14 and N12. The roads would not be tolled, she told The Star.

Mokonyane said the upgrades on the N14 would be from Krugersdorp through to Diepsloot.

Mokonyane said there was a need to upgrade the two national highways, but added that some of the finer details would be dealt with in her address.

Mokonyane painted a positive picture of her five-year term as premier. She said she had succeeded in forging integrated communities and suburbs.

â€œWe have created a lot of economic opportunities and invested in quality education. We have also seen a dramatic increase in the number of pupils getting university entrance marks.

â€œThere are also now better working relations between teachers and parent bodies. We have also reduced the number of troublesome schools, particularly in Soweto, from 200 to 80.

â€œOur Secondary Schools Intervention Programme is working. In the past, we used to babysit principals, but the situation has changed now. Most of them are committed to work,â€ Mokonyane said.

She was also expected to announce the handing over of 11 new schools to the Department of Basic Education.

Two school hostels in Magaliesburg and Fochville were also expected to be handed over to the department.

Mokonyane has committed herself to ending the Jabulani/Zola Hospital debacle.

She said the hospital would be up and running before April 27 â€“ when the country celebrated 20 years of democracy.

â€œIn the past, people asked me to open one wing of the hospital, and I refused. I want to give the people of Soweto a fully functional hospital.

â€œWe have a team of quality assurance (inspectors) on site who are doing a final inspection of the hospital before we decide to do a final handover to the Health Department,â€ she said.

She was also expected to reveal the name of the woman appointed to be the hospitalâ€™s chief executive.

Mokonyane said the hospital delay had been caused by a lack of personnel to do project management in the Infrastructure Department.

She said the department had beefed up its staff, who had the necessary skills and academic background to do the job.

Mokonyane was also expected to announce more than R1bn to develop a new suburb in Syferfontein, which would accommodate the people of Bekkersdal, who have taken part in numerous service delivery protests.

She has also been involved in a bitter fight with some communities. In a fit of rage, Mokonyane once said the ANC did not need their â€œdirtyâ€ votes. She later apologised.

â€œWe will move the people of Bekkersdal. We will explain to them that our decision was based on the fact that they were living on dolomitic land,â€ Mokonyane said.

In April, the government would start to build two new schools.

President and Albertina Sisulu streets were to be blocked off from 10am on Monday at their intersections with Sauer, Harrison, Simmonds and Rissik.

A parade with drill officers from the JMPD, SAPS, Gauteng traffic police and officers on horseback was set to start on the corner of Albertina Sisulu and Sauer streets, turning left in Harrison and then right into President up to the legislature.

Roads were expected to be opened again at 2pm.