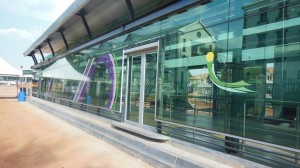 Negotiations to ensure the inclusion of the taxi industry and the prevention of displacement were still under way.

The City of Tshwane, in Gauteng, started commissioning the inception phase of its bus rapid transit (BRT)Â systemÂ the ARe YengÂ after the delivery of the first of the initial 30 buses on Tuesday.

The remaining 29 rigid 12-m-long inception buses would be phased in by May 31, as 48 taxi drivers, recruited from the 75 who applied for the bus driver positions, underwent vigorous training to handle the new publicÂ transportÂ vehicles.

The buses for the BRTÂ systemâ€™sÂ inception servicesÂ started coming off the production line on April 14, explained MMC forÂ TransportÂ George MatjilaÂ at the unveiling of the new bus at the AÂ Re YengÂ bus station, in Hatfield.

The chassis kits of the AÂ Re YengÂ buses were assembled at Volvoâ€™s completely knocked-down plant in KwaZulu-Natal, after which they wereÂ roadÂ freighted to Marcopolo in Germiston, where the bodybuilding took place.

TheÂ Tshwane Bus Services depotÂ was being upgraded for use as an interim depot, where the buses would be housed and all maintenance, refuelling and administration would take place.

The AÂ Re YengÂ control centre, which controlled all communications linked to the AÂ Re YengÂ trunk line, would be established at theÂ Tshwane Metropolitan Police Department headquarters.

The buses, which would be operated under a â€œhigh-techâ€Â systemÂ and would rely â€œheavilyâ€ on an intelligenceÂ transportÂ system, as well as provide free WiFi services, could accommodate 33 seated passengers and 35 standing passengers.

Meanwhile, negotiations to ensure the inclusion of the taxi industry and the prevention of displacement were still under way, with the recruitment and training of taxi drivers who operated theÂ Menlyn,Â ElardusparkÂ andÂ PretoriaÂ stationsâ€™ taxis, kicking off in May.

The taxi drivers, who were sourced from a database of operators expected to be impacted by the introduction of AÂ Re YengÂ in the inception phase, would complete their training by the end of June, explained AÂ Re YengÂ executiveÂ projectÂ managerÂ Lungile Madlala.

â€œThe training of the drivers will include an induction regarding the TRTÂ system, working conditions of bus drivers, procedures and policies of the TRT, customer care, BRT operations and compliance with contractual obligations,â€ she said.

More drivers would be recruited and trained as the next phases of the BRTÂ projectÂ progressed.

Speaking to the media at the launch, executive mayorÂ Kgosientso RamokgopaÂ said the delivery of the first AÂ Re YengÂ bus was the start of Tshwaneâ€™s long-term ambition of placing 85% of its population within 500 m of the BRT trunk or feeder corridor.

The seven-day-a-week bus service would operate from 06:00 until 20:25 from Monday to Friday, with trunk services every seven minutes in peak periods and every ten minutes in off-peak periods. On Saturdays, AÂ Re YengÂ would operate from 06:00 until 23:40, with ten-minute breaks between services during peak hours and 20-minute breaks during off-peak hours.