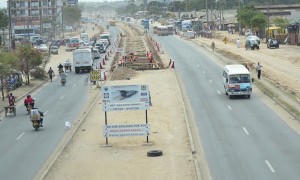 SMART: Structures take shape for the expected opening at the end of 2014.

Operations are expected to take off at the end of this year.

â€œIt is our honour to be part of this project in Tanzania, works of the project that is aimed at reducing traffic congestion at Dar es Salaam include constructing a 20.9 kilometre trunk road at the Kimara terminal, Kivukoni, Msimbazi, Fire, Gerezani and a part of Kawawa Road from Magomeni to the Morocco Road junction,â€ Rebel Group fare collection advisor, Jeroen Kok said after the deal ws sealed.

Eighteen firms submitted an expressions of interest, but Rebel Group won out of the selected short-list of six names.

The project that was launched in 2010 and expected to be completed at the end of this year is anticipated to ease transportation and traffic congestion in Dar es Salaam. It is hoped this will also open up other economic activities.

He said that it was a government priority and a necessity for DART operations to take off as soon as possible.

He said the project was important for the growth and economy of city residents.

For years Dar es Salaam city has always been experienced traffic jams which mostly affect the performance of the working and business class personnel that retard the growth of the city to the larger extent.

The PS Â insisted that there was already e framework in place for the implementation of the Public Private Public Partnership (PPP) project saying DART was a good project that would ensure involves a private sector investment of about $180 million.

He said that with the public sector investing around $250 million into the partnership there would be a lot of job creation in the project and this would demand more future investment opportunities in form of PPP partnership.

â€œThe DART is one of the modern forms of transportation in the East African region that is expected to woo other partner states in to drawing lessons from its success in its implementation processesâ€ The PS said.

On his part the Rebel Group Fare Collection Advisor Jeroen Kok said there were much eager to working in the country aiming at easing the city traffic congestions.

The on-going construction of DART project with a distance of 20.9 kilometres special trunk road is expected to cover a stretch road of Morogoro road which is the major artery in the city connecting Dar es salaam to different regions of the country, and part of Â Kawawa road from Magomeni to Morocco junction.

On completion Dar will be able to boast of the most efficient public transport in the region.