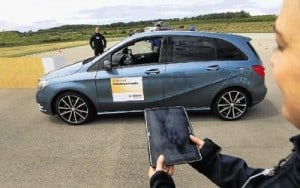 One family would share a driverless car, and each shared vehicle could displace nine cars â€¦ resulting in car production taking a huge knock. Picture: BLOOMBERG

US car sales may drop about 40% in the next 25 years because of shared driverless cars, forcing mass-market producers such as General Motors (GM) and Ford to slash output, a Barclays analyst predicts.

Vehicle ownership rates may fall by almost half as families move to having just one car, according to a report published by the analyst, Brian Johnson. Driverless cars will travel twice the distance of current cars because they will transport each family member during the day, he writes.

Large-volume car makers “would need to shrink dramatically to survive”, Johnson writes. “GM and Ford would need to reduce North American production by up to 68% and 58%, respectively.”

Self-driving cars have become a frequent topic for executives as the technology for the vehicles emerges. The market for autonomous technology will grow to $42bn by 2025 and self-driving cars may account for a quarter of global car sales by 2035, according to Boston Consulting. By 2017, partially autonomous vehicles will become available in “large numbers”, the firm said in a report last month.

Johnsonâ€™s report, Disruptive Mobility, contends that the shift to cars that drive themselves will upend the car industry.

“Weâ€™ve looked over the horizon and contemplated how technology may change the market,” says GM spokesman Jim Cain. “Our designers, scientists and engineers are working at the cutting edge, and weâ€™re confident GM will be very successful.”

Ford did not respond to a request to comment on the report.

When most vehicles are driverless, annual US car sales will fall about 40% to 9.5-million, while the number of cars on American roads will decline 60% to fewer than 100-million, Johnson estimates.

“While extreme, a historical precedent exists,” he writes. “Horses once filled the many roles that cars fill today, but as the automobile came along, the population of horses dropped sharply.”

Car makers are working to overhaul their business models for a world where mobility is being redefined as most of the global population crowds into large megacities during the next two decades.

Driverless cars that move in harmony may become essential to keep people and goods flowing safely and efficiently.

Every shared vehicle on the road would displace nine traditional cars, and each pooled shared vehicle would take the place of as many as 18, according to Johnsonâ€™s report.

Consumersâ€™ cost of mobility would drop dramatically, he predicts. “By removing the driver from the equation (the largest cost in a taxi ride), the average cost per mile to the consumer could be 44c for a private ride in a standard sedan and 8c for a shared ride in a two-seater,” Johnson writes, noting that this would be “well below” the $3 to $3.50 a mile consumers now pay to ride in an UberX car or the $1 to $1.50 a mile for an UberPool vehicle.

The shift to driverless vehicles will benefit transportation network companies such as Uber, autonomous technology providers such as Mobileye and makers of low-cost vehicles, according to the report.