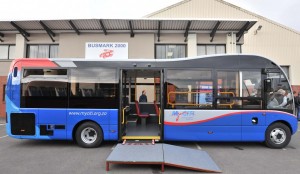 FRESH OUT THE BOX The City of Cape Town approved the Integrated Transport Plan (ITP) to provide the city with a sustainable transport system that would move all of its people and goods effectively, efficiently, safely and affordably.

There are about 550 000 passengers that journey every day using buses and minibus taxis. Consequently, in June 2007, the City ofÂ Cape TownÂ approved the IntegratedÂ TransportÂ Plan (ITP) to provide the city with a sustainabletransportÂ system that would move all its people and goods effectively, efficiently, safely and affordably.

The development of the ITP was based on the concept and principles of a BRT system.

South AfricaÂ is in the process of formalising itspublic transport servicesÂ and, accord- ingly, in 2009, the National LandÂ TransportÂ Act was adopted as part of a plan for publicly controlledintegrated transport systems.

The Act enables cities to take greater control of planning, regulating, implementing and monitoringÂ public transport services. In essence,Â South Africa, and in this caseÂ Cape Town, drew on successful examples from countries across the world where efficient and affordable BRT systems have been established, saysÂ Kaytech.

The development and construction of the new Integrated RapidÂ Transportsystem centred on the MyCiti BRT system, which was designed to be rolled out in phases and, once completed, would cover the entire city and its surrounding suburbs.

The initial phase included the airport-city link and the city-stadium link, which enabled the city to meet the publicÂ transportÂ requirements for the 2010 Host CityÂ TransportÂ Operations Plan, which was an integral requirement of global football federation FIFA. While Phase 1 focused on the cityâ€™s 2010 obligations and servicing the Atlantis corridor, Phase 2 will address the more pressing social aspects of theÂ public transport network.

Part of the full Phase 1 plan included theÂ R27Â from Sandown road to Blaauwberg road, which entailed the widening of the road to accommodate the new, reinforced-concrete bus lanes. This portion of the road included areas where the water table was very high, which often intersec-ted the road prism. Hydration of the layer works may, over time, lead to failure and even- tual structural failure of the entire road, saysÂ Kaytech.

To mitigate this,Â KaytechÂ recommended that about 6 000 m2Â of bidim grade A1 be used to perform two functions: drainage, to keep water away from the layer works, and filtration, to prevent the ingress of in situ soil fines into the drain. â€œThe extremely high porosity and permeability of bidim enables groundwater to freely enter the drainage system without the filter qualities of the geotextile being severely compromised. The integrity of the layer works is therefore preserved,â€ says the company.

Bidim converts â€˜greenâ€™ polyethylene terephthalate (PET) pellets and flake into extruded fibre through a continuous filament spun bonding process, which is then needle-punched to give the finished geotextile its structural integrity. This process involves melting down the granulated, recycled PET bottles, favoured by the soft drinks industry, which then crystallises the polymer and spins it directly into filaments.

The good properties that are contained in the raw material are then retained and the resultant filaments have the durability and strength demanded for projects such as this one.

Growing congestion onÂ South Africaâ€™s citiesâ€™ roads, and concerns around air quality, have led to a focus on ensuring that the country meets the needs of its population in the coming decades. With fewer private cars on the roads, the BRT system will hopefully reduce carbon emissions and resolve daily traffic congestion, concludes the company.