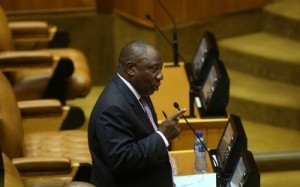 DEPUTY President Cyril Ramaphosa has been given the task of steering the governmentâ€™s approach to e-tolling, it emerged on Sunday after Gauteng premier David Makhura received the report from a panel reviewing the socioeconomic effect of the system.

Mr Makhura would not reveal any of the panelâ€™s recommendations, but it is widely believed that anything other than the current system would place the South African National Roads Agency (Sanral) in a precarious situation. Sanralâ€™s debt amounts to about R39bn and the Gauteng Freeway Improvement Project accounts for about half of that.

Gauteng motorists have generally rejected e-tolls. This intensified after the African National Congress (ANC) in Gauteng took a resolution at its conference in October to reject the e-tolls in their current form.

Mr Ramaphosa now has to navigate this difficult terrain, as he works with the province and a team of ministers.

Mr Makhura said he would present the report to his executive, study it and consult municipalities and the national government. “The deputy president has been mandated by the Cabinet to work with us formally on this matter. It is an officially agreed process.”

Mr Ramaphosaâ€™s spokesman, Ronnie Mamoepa, could not be reached for comment on Sunday.

Sanral chief financial officer Inge Mulder said on Sunday that if the panel recommended any alternative to e-tolling â€” such as raising the fuel levy â€” Sanralâ€™s debt would have to be paid in full. That could place SAâ€™s sovereign credit rating at risk.

But Howard Dembovsky, chairman of the Justice Project SA, said the opposite result was likely if a recommendation to replace e-tolls with the fuel levy was accepted by the national government. “Money would roll in to pay this enormous debt; it would stop the financial haemorrhaging taking place right now,” he said.

“No matter how dogged Sanral is … at the end of the day itâ€™s all about collecting the money, which they are not doing now.”

Mr Makhura said the report would be released to the public once all the consultations were concluded and a decision made on the way forward. This would happen early next year.

“People had heated views and it all took place in the spirit of democracy… now the ball is in our (governmentâ€™s) court,” he said.

The e-toll system was blamed for the ANCâ€™s poor showing in Gauteng in this yearâ€™s national election. As a result, some critics have dismissed the e-tolls review panel as a “public relations exercise”.

But Mr Makhura said on Sunday “democracy could never be a public relations exercise”.

The Department of Transport had initially dismissed the panel Mr Makhura set up in July, but decided to make a submission to it last month. It said this was needed to “correct misconceptions”.

Sanral also made a presentation to the panel, after the ANC in Gauteng had submitted that the agencyâ€™s mandate had shifted from the provincial governmentâ€™s initial ideas on urban tolling.

The provincial ANC is not opposed to the “user pays principle” per se, the party has said.