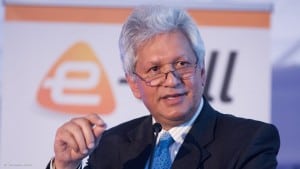 There were a number of â€œinconvenient truthsâ€ often ignored in the debate around tolling the 201 km of Gauteng highways upgraded during the Gauteng Freeway Improvement Project (GFIP), said South African National Roads Agency Limited (Sanral) CEO Nazir Alli on Tuesday.

Speaking at the Intelligent Transport Society South Africaâ€™s i-Transport conference, in Midrand, he said the fuel levy â€“ often touted as the preferred method of payment for the infrastructure upgrades â€“ would need to increase by R3.60 a litre in 2014 money terms, plus inflation, over ten years to accommodate the demands of South Africaâ€™s road network.

He added that the fuel levy was a diminishing income source, with electric vehicles, using no fuel, poised to become mainstream over the next few years.

Alli noted that a national, general fuel levy was also an inequitable method of securing funding for Gautengâ€™s toll road network, as â€œpeople who will never use it, will pay for it. But this is an inconvenient truth we do not want to acceptâ€.

He added that governments globally had only one real source of income â€“ tax, with borrowings not classified as income. He said this income had to meet many infrastructure demands in South Africa, which was an impossible task.

He noted several projects, such as housing and social grants, that could be dropped in favour of â€œfree roadsâ€.

â€œWe will have to up the ante on our communication.â€

Alli also emphasised that the effect of nonpayment on Gautengâ€™s toll roads would have a spill-over effect on, for example, the financial ratings of the country and other government institutions, and ultimately, also the working environment of the private sector.

â€œEverything is interconnected, but again this is an inconvenient truth.â€

Without Phase 2 of the GFIP, in the pipeline, a project such as the Ekurhuleni Aerotropolis would â€œchoke before it even startedâ€, for example.

Alli also lamented the â€œdeadly silenceâ€ of those who should be supporting the implementation of toll roads, such as professionals whose jobs depended on technologies such as electronic toll collection systems.

The media had to be â€œa bit fairerâ€ when reporting on the debate surrounding Gautengâ€™s toll roads, he added.

â€œThere is a 4% difference, which I believe in the emotionally charged atmosphere we have been working in, is splitting hairs. But what has the narrative been? Because this is an inconvenient truth again, the narrative has been about those people who disagree.

â€œWhy do we never want to discuss these things in a fair and reasonable manner?

â€œIn the debate right now, the culture of nonpayment is what we are promoting, and the high tolerance for white collar crime.

â€œAll we hear are the voices of those who say no, all the time,â€ said Alli.