CT TO INSTALL CAMERAS AT SMASH AND GRAB HOTSPOTS 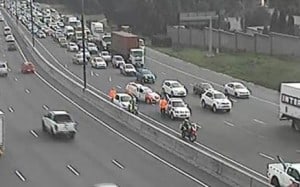 FILE: The roads notorious for smash and grabs and stone-throwing incidents. Picture: Sanral.

CAPE TOWN â€“ City of Cape Town bosses say plans are on track to roll out their CCTV camera footprint on roads notorious for smash and grabs and stone-throwing incidents.

Plans are on the cards for these cameras to be installed along Jakes Gerwel Drive and sections of the R300.

â€œWeâ€™ll be focusing, among others, on the R300 intersections at Jakes Gerwel because it is a notorious smash and grab hot spot. Cameras in that area will also allow us to deal with persistent illegal protests action to try and get early warning to that we can try to solve those matters more expeditiously.â€

Meanwhile, the Johannesburg Metro Police Department says it has already seen a decline in smash and grabs at identified hotspots following the introduction of its Ke Molao operation.

The initiative was launched in February and has already seen the arrest of over 168 people.

Those who have been arrested have to pay a R300 fine or appear in court.

The Social Development Department is working with Metro Police in making sure beggars and other people removed from the streets are taken to shelters.