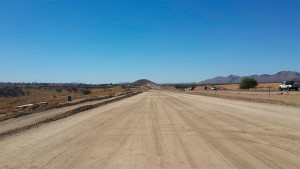 The project is expected to be completed by April 2016.

Multidisciplinary construction and engineering group Aveng Grinaker-LTA has started upgrading the B1 national road between Windhoek and Okahandja, in Namibia, to a dual carriageway at a cost of N$239-million.

The road is considered the countryâ€™s most dangerous, owing to the large number of heavy vehicles it accommodates, prompting the Namibian government and roads authority to upgrade it to a dual carriageway.

Aveng Grinaker-LTA will upgrade a 10 km stretch of the road.

The project will also include 691 000 m3 of mass earthworks and 324 000 m2 of single seal surfacing. Two interchanges will also be built, each with a north and southbound bridge.

Further, a 4.5 km service road will be constructed to create access to the plots next to the carriageway.

The project is expected to be completed by April 2016.

â€œOwing to the new road being an upgrade from a standard two-way national road to a double carriageway, it will remove the danger of having to pass slower vehicles while facing oncoming traffic. The other benefit will be to alleviate the build up of traffic during peak hours,â€ said Evans.