Commuters fed up with overcrowded vehicles 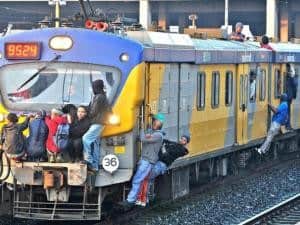 Cape Town – Cape Town commuters are sick of having to travel in overcrowded train carriages, and the statistics prove it.

Four out of every five train commuters in Cape Town polled for a new report by Statistics South Africa (StatsSA) â€“ or 80 percent â€“ indicated they were â€œdissatisfiedâ€.

The survey is based on responses from thousands of Western Cape residents to questions posed about their use of public and private transport, and what they most disliked about their choice.

Asked to rate the level of crowding in trains, more than 80 percent of respondents in the Mother City said they were â€œdissatisfiedâ€.

The dissatisfaction rate drops steeply outside of Cape Town, however.

In the West Coast and Cape Winelands district municipalities, around half of respondents flagged overcrowding as an issue.

But she countered that this was a â€œfamiliar situation in most metropolitan cities across the worldâ€.

Scott said that over the past five years the Passenger Rail Agency of South Africa had embarked on a â€œmassive modernisation programmeâ€, which included buying 600 new trains and 70 locomotives for Metrorail, upgrading stations, and improving the signalling system.

Many of the benefits from these upgrades, which would â€œdramatically improve service deliveryâ€, would come to light in the â€œmedium to long termâ€.

They were expected to be fully implemented in the next 20 years.

â€œWhilst the modernisation programme is under way, Metrorail is expected to deliver quality services to its customers under current conditions,â€ said Scott.

The survey forms part of the the larger National Household Travel Survey (NHTS), a major investigation undertaken every 10 years that is designed to inform national and provincial transport policy.

While the NHTS findings were published last year, based on the survey that took place between January and March 2013, the provincial survey includes reams of data about transport which has not previously been made public.

Another issue highlighted by respondents was security in and around rail precincts.

Two-thirds of rail commuters in the Mother City feared falling victim to criminals on the walk to and from train stations, the highest percentage in the province.

Cape Town commuters felt safer once they entered the station, with only a third saying security needed to be beefed up.

But once they boarded and started travelling on trains, they again started feeling more unsafe, with half of respondents saying they were â€œdissatisfiedâ€ with the level of security provided.

Scott said safety around stations had been improving.

â€œMetrorailâ€™s Protection Services staff has increased significantly, leading to increased arrests and a decline in criminal activity in rail precincts,â€ she said.

Steps taken to boost safety included making use of park and ride facilities, the formation of a tactical mobile response unit, the installation of high-mast lighting at a number of stations, as well as CCTV cameras.

The study also found that six out of 10 commuters in the province were also unhappy with the punctuality of trains, while a third were dissatisfied with travel times once they boarded trains.

Issues that least concerned commuters included fear of accidents and ticket prices, with only a quarter of respondents saying they were unhappy with either.

Of the three modes of public transport in the city, the â€œoverall serviceâ€ of trains was rated the worst (49 percent dissatisfied), followed by taxis (41 percent), and then buses (26 percent).

While buses were viewed most favourably, they were also the least used, with fewer than one out of 10 people in the Western Cape using buses as their â€œmain mode of transportâ€.

Taxis were found to be, by far, the most common mode of public transport.

Roughly half of respondents in the province, however, complained of overcrowding, concerns about roadworthiness, and how taxi drivers treated passengers.

But taxis were praised for being easy to catch and cheap.