‘CLOSING OF E-TOLL KIOSKS NOT LINKED TO FINANCIAL ISSUES’ 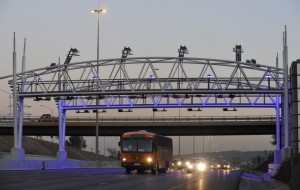 The company contracted to handle registrations and payment of e-toll bills has dismissed claims that the closure of some kiosks in Gauteng is the result of financial problems.

The Opposition to Urban Tolling Alliance (Outa) is, however, adamant this is the case and that the South African National Roads Agency Limited (Sanral) realises the system has failed.

But it appears many motorists have heeded the call by Outa and the Congress of South African Trade Unions (Cosatu) not to pay to use the highways.

Electronic Toll Collection (ETC) CEO Jamie Surkont says the closure of 12 temporary e-toll kiosks over the last six months was part of the evolution of the project.

Sanral CEO Nazir Alli agrees the closures were always planned and that staff members were not employed on a permanent basis.

But Outaâ€™s Wayne Duvenage says the kiosks stopped operating because only about 30 percent of motorists are paying their e-toll bills, which is well below the target.

Gauteng premier David Makhura is expected to meet with provincial government early next year to discuss findings of a panel he set up to assess the impact of the tolling system.