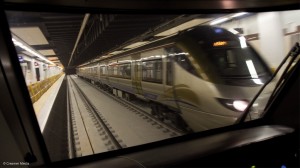 Johannesburg – Losing cellphone signal at underground Gautrain stations is set to become a problem of the past.

This is after mobile network Vodacom announced on Wednesday that its coverage now extends to underground Gautrain stations.

The communication solution has been rolled out over the past three months by Vodacom in partnership with the Department of Roads and Transport, the Gautrain Management Agency, Bombela Concession Company and the Strategic Partners Group.

â€œIâ€™ve always found it frustrating when Iâ€™ve gone into one of the underground station and couldnâ€™t connect, especially when Iâ€™ve had some free time while waiting for the train,â€ said Andries Delport, Vodacomâ€™s chief technology officer, in a statement.

â€œWe pride ourselves on having the fastest and widest network in South Africa and now we can add â€˜deepestâ€™ coverage to that claim as well,â€ he said.

The Vodacom cellphone signal, though, does not extend to tunnels in the Gautrain system yet. But Vodacom says that it plans to roll out tunnel coverage in the second phase of the signal deployment.

â€œThis is the first phase of the process. Our next task is to work on ensuring that we have a seamless service throughout the Gautrain route. That means not dropping a call when you go into a tunnel. Weâ€™re currently in talks with our partners to roll this out,â€ said Delport.

Explaining how the cellphone signals have been deployed at stations, Vodacom said that the â€œsolution is made up of distributed antenna systems located throughout the three stationsâ€.

â€œEach of these systems is connected via fibre-optic cable to network equipment located in Rosebank. 2G, 3G, and LTE (4G) services will all be enabled with this solution,â€ said Vodacom.

MTN’s offering will launch on July 3.

An expansion of the MTN network on the Gautrain network is also planned.