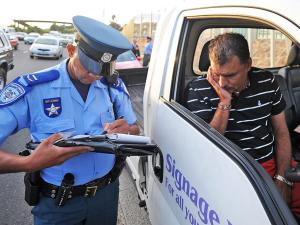 Cape Town – Traffic fines for motorists who break the law in the Western Cape are set to rocket in a bid to quell the carnage on the roads.

The increases, approved by the chief magistrate of the Western Cape, will come into effect on 1 August.

Failing to stop when a traffic officer commands you or driving without a licence used to warrant a R500 fine; that has tripled to R1500. Fines for unroadworthy vehicles have also tripled from R1000 to R3000.

Transport MEC Donald Grant said death due to reckless driving had to come to an end on provincial roads.

â€œThe pressure it puts on our economy and hospitals is no longer acceptable.â€

â€œItâ€™s the first time in history that fines have been increased up to 300 percent,â€ he said.

Speeding fines for regular vehicles have not increased, although public transport vehicles face harsher penalties for exceeding the limit.

â€œBut there will always be people who are not going to pay.â€

Marius Luyt of the Automobile Association said the increased fines were likely to make roads somewhat safer, but there would always be fine-dodgers and law-breakers.

â€œItâ€™s a good thing. There are people who will take into account the fines and will obey the law. They will be very careful because people these days canâ€™t afford big fines.â€

Luyt added that implementation would be a burden on law enforcement.

â€œIf you look at the court system right now, we are clogged up with cases; we must look at our resources and ask, can we enforce this?â€

Only 33 percent of traffic fines are collected, according to Africa.

â€œWhat weâ€™re doing to raise that rate is having road blocks and making sure we get those culprits arrested,â€ he said.

Grant also announced his approach to the wet weather.

â€œThe Capeâ€™s notorious winter season is well upon us, bringing with it wet and dangerous road conditions,â€ he said.

Nearly 900 operations are planned for June, July and August, including 327 roadblocks and missions targeting fatigue, speed, transport of schoolchildren and pedestrian safety.

Africa said some of the biggest problems in winter were people not keeping a safe following distance, exceeding the speed limit and not wearing seatbelts.

â€œMore or less 80 percent of fatalities in the Western Cape are because of people not wearing their safety belts.â€

Another issue was driver fatigue.

A project along the N1 between Aberdeen and Laingsburg has seen 46 023 drivers pulled over and checked for fatigue since December 2011, with 3203 having to park and take a compulsory nap before driving on.

For the two-year period before the operation started, there were 106 fatalities on that stretch. In 2012, that figure was reduced to six, with only two last year.

â€œWe are gradually seeing the number of deaths decline. There is no doubt our concerted efforts are making a difference on our roads,â€ he said.