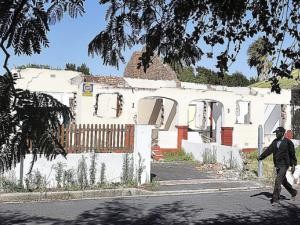 The city has started demolishing houses in Wynberg and Plumstead to make way for a MyCiTi bus route that will also leave 26 families homeless. Some of the families refuse to move. Picture: COURTNEY AFRICA

Cape Town – Residents from Wynberg and Plumstead met taxi associations last night to discuss alternatives to the City of Cape Townâ€™s controversial MyCiTi route that will require houses in the area to be demolished.

â€œWe are here with a common purpose to see what is going on behind our backs. To see what will affect our livelihoods,â€ said Clive Muller of the South Road Familiesâ€™ Association.

Several taxi operators gathered at the Muhammadeyah Primary School in Plumstead to raise their concerns about the impact of the proposed route that will have a significant impact on Wynberg Main Road, turning it into a one-way section.

Kristina Davidson of the Wynberg Residentsâ€™ and Ratepayersâ€™ Association said the new route would mean that all roads parallel to South Road in Plumstead would become cul-de-sacs. It would create a four-lane road going through a residential area where most buildings were older than 60 years.

â€œBut itâ€™s bigger than Wynberg,â€ she said. It would affect Ottery Road up to Strandfontein Road, as well as taxis on the Claremont to Kenilworth route.

One of the taxi operators said associations needed to understand that the proposed route would affect taxi drivers from Lotus River and other areas too.

Naasif Daries, of the Two Oceans region, said Transport for Cape Town indicated two years ago that the taxi industry would be involved in the process. â€œUnfortunately until today, they have not come to Wynberg, or Hanover Park or any of the industry to speak to us.â€

Davidson said last night that the city had yet to answer key questions about the proposed route. Various issues needed to be clarified, including whether environmental impact assessment studies had been done before the houses were demolished.

â€œThe city is not interested in telling anyone what is going on.â€

Davidson said residents did not object to integrated public transport. â€œWe have, in conjunction with other organisations in Wynberg, simply asked to be consulted before the city proceeds with a plan that will fundamentally change the very nature of our suburb and our CBD.â€

The cityâ€™s Transport for Cape Town has indicated in statements and in response to questions that the Lansdowne Wetton Corridor, that will include South Road, will serve more than 1.4 million commuters from 34 communities. The project requires an investment of R1.4 billion in accordance with national grant funding.

The city issued termination of lease notices to 26 tenants living along the South Road route last year, giving them four months notice to vacate their properties by January 31.

Since then, eight tenants have been granted a reprieve for being in good standing with their rates accounts, and have been offered alternative housing. But the remaining 18 are now living illegally in their council houses, and the city has warned that it will start legal proceedings to have them evicted.

Davidson said it was worth noting, however, that the route had not yet been approved by the council or proclaimed by provincial government.

The city has said that the mini bus taxi subcommittee, comprising representatives from Santaco Western Cape, each of the six regions in the city, including Two Oceans, Mitchells Plain and Codeta had been briefed on the Lansdowne Wetton Corridor last year.

Meanwhile, the Western Cape governmentâ€™s standing committee on transport and public works has invited Brett Herron, mayoral committee member for Transport for Cape Town, and the affected residentsâ€™ associations to the legislature next week to discuss concerns about the project.