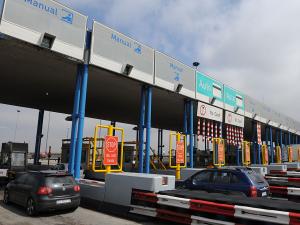 Sanral says it will be a boom-down situation, like this one, where you go, you stop, you pay and you go. Picture: Chris Collingridge

Cape Town – The introduction of tolls to the Western Cape is only one small part of the proposed N1/N2 Winelands Toll Highway Project.

South African National Roads Agency Limited project engineer Tiago Massingue said on Tuesday: â€œTolls are a small component of the overall project. In money terms, it’s not even 20 percent. The bulk of the cost is for upgrades.â€

Speaking on the sidelines of a Sanral media briefing in Bellville, he said the project included 16 â€œbrand newâ€ interchanges and upgrades to pavements, bridges, and tunnels.

“You’d call it a traditional toll.”

“It’sÂ a boom-down situation where you go, you stop, you pay and you go.”

He said the e-tolling system, as introduced in the Gauteng Freeway Improvement Project, was only valid when roads carried a huge number of vehicles.

An example was the Ben Schoeman Interchange in Gauteng which carried 220 000 vehicles a day, making it impractical to stop and start with traditional tolls.

Massingue said highway portions around Cape Town carried between 52 000 and 160 000 vehicles a day.

“In 30 years from now, if that situation did arise that we jump exponentially to the high volume recorded in Gauteng, then we’ll introduce e-tolling.”

In May 2013, the Western Cape High Court granted the city of Cape Town an interim interdict preventing Sanral from implementing or advancing the toll project, including the conclusion of any contract or commencement of construction.

The interim relief was granted pending the court’s review of Sanral’s decision to implement the toll project.

The review date has yet to be determined.

Massingue said Sanral had not negotiated a contractÂ with a prospective concessionaire pending the “unfortunate” court action.

Sanral is responsible for about 19 700km of the country’s 750 000km road network. Of these 84 percent of roads are not tolled, nine percent are operated by agency tolls, and seven percent by private concessionaires.

Asked why Sanral wanted to use a private funding model for the Winelands project instead of looking to the National Treasury, he said: â€œOur annual budget from the Treasury is R10 billion. This project, a single project, will cost R10 billion. It’s almost impossible for Treasury to raise that kind of money for upgrades.

â€œIt’s wrongÂ to assume the Treasury will always have money â€“ but, regardless of who pays, the upgrades and improvements remain crucial.â€ SAPA