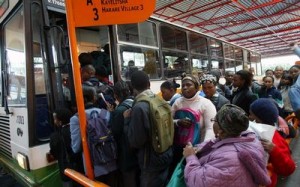 INVESTMENT conglomerate Hosken Consolidated Investments (HCI) received an unexpected boost from one of its unsung assets in the six months ended September.

Interim numbers released on Thursday showed that Golden Arrow Bus Services, acquired for R250m in 2004, more than doubled its contribution to HCIâ€™s headline earnings to R68m.

The performance comes off a low base, but it means Golden Arrow was the second-biggest contributor to HCIâ€™s R399m headline earnings. HCI earns most of its keep from its controlling stake in gaming giant Tsogo Sun, which chipped in R310m to headline earnings.

The marked improvement in headline earnings from Golden Arrow, which services the Cape Town market, came off a 26% increase in revenue to R691m.

CEO of HCI Johnny Copelyn said improvement in efficiencies from controlled employment and overhead expenditure in Golden Arrow contributed to the improved performance. But he noted the comparative period was significantly affected by the transport strike.

HCI could also cheer Niveus Investments, its alternative gaming and liquor subsidiary, which saw struggling subsidiary KWV benefiting from the weaker rand. The interim results showed a turnaround for the wine and brandy producer, which managed R21m in profit before tax compared with a loss of R19m in the corresponding period last year.

CEO of KWV Andre van der Veen admitted the significant improvement was mainly due to the rand depreciating against major currencies. If the exchange rate effect was adjusted, KWV revenue would be about 4.5% lower than last yearâ€™s interim period as a result of a 6% drop in sales volumes, he said.

The KWV result included exchange rate profits of R7.4m compared with a R38m loss last year. The main contributor to the decline in revenue is a 6% decrease in sales volumes.