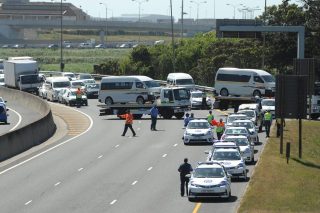 Taxi drivers in the Gauteng province of South Africa have taken to the streets to stage a demonstration for their request of a R10 billion relief fund. Their demonstration has disrupted the usual flow of Monday morning traffic in the area, as minibuses decline to carry commuters and major roads are blockaded.

The South African National Taxi Council (Santaco) went ahead with the strike despite a public plea by the South African transport minister, Fikile Mbalula. Fikile disclosed Santaco is demanding about R10 billion as relief fund to cushion the industry, an amount the government can’t afford.

“The problem is that we are supposed to share this money with the e-hailing and metered taxis and when you calculate this it comes down to less than R3000 in relief,” said Midday Mali, Santaco’s spokesperson.

As both parties are yet to reach a truce, the taxi drivers categorically stated that they wouldn’t be resuming operations until their request is fulfilled by the government.

Unfortunately, the brunt of the strike is majorly felt by thousands of commuters that have been left stranded at the mercy of irregular taxi-services.

Also, the protesters have blocked the road network, forcing road users to transit via alternative routes.

The taxi industry was hardly hit by the lockdown put in place since March 2020, which has left the economy in a feeble state as people lost their jobs, businesses shut operations, and the price of basic commodities increased.

South Africa is in the third stage of its lockdown, which allows for the movement of people and for business operations, all of which require taxi-services for transportation.

Given the current strike, the scarcity of taxis could lead to a hike in fares, consequently affecting people who are just starting to make a living again, after months of pay cuts and other financial steeps.

The Western Cape Transport and Public Works Minister, Bonginkosi Madikizela, is set to visit the Khayelitsha taxi rank today for dialogue with members of Santaco with regards to the proposed increase in taxi fare.

Santaco was established in 2001 and currently has approximately 130,000 vehicles in operation. 95 000 of its fleet, cover short and medium distance trips in the urban area, and the remainder for rural and inter-city transport. Over a third of the taxis ply routes in the Gauteng province.