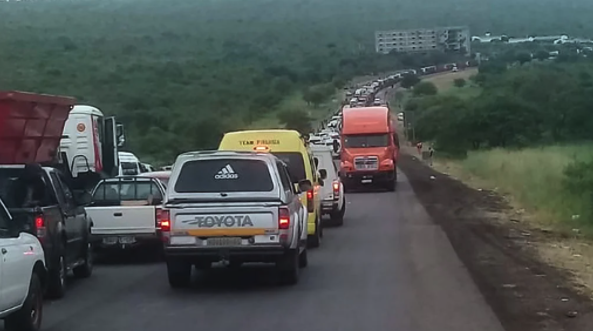 South Africa’s border posts with neighbouring countries are buckling under the pressure amid hard lockdowns and strained coronavirus testing protocols. The situation at Lebombo Border – which connects South Africa and Mozambique – has now been described as a disaster, with both lives and livelihoods at serious risk.

While urgent attention remains fixed on the influx of travellers congested at the Beitbridge border post between South Africa and Zimbabwe, a “humanitarian crisis” is quickly developing at Lebombo. No ablution facilities nor running water and delays exceeding six days have distressing similarities to scenes which preceded Beitbridge’s Christmas Day chaos.

Queues which stretch for more than 25km, with motorists dehydrated and hungry in temperatures exceeding 32°C, have stagnated for a number of reasons. The sudden influx of cross-border travellers attempting to escape hard lockdowns in neighbouring countries or return to work in South Africa after the holiday period has piled on the pressure. But freight associations argue that the South African government’s failure to align stringent Covid-19 protocols with the number of people required to test and screen is directly responsible for the border backlog.

“We support the requirement for the testing to be done, but border personnel are overwhelmed and cannot cope with the situation,” says Mike Fitzmaurice, CEO of the Federation of East and Southern African Road Transport Associations (Fesarta).

“What is more concerning is that they have also stated that the additional manpower promised by the minister of home affairs has not materialised.”

These delays have had a dire economic impact on the freight industry, with Fitzmaurice estimating losses to have exceeded R166 million since Sunday 3 January to Thursday, which amounts to more than R33 million a day.

“Under normal circumstances each of our trucks moves four loads in six days. Currently, they have only moved one load in five days,” says Bernard Lunga, the managing director of trucking company Bensco Logistics. The delays at the Lebombo border threaten to shut down his business, he says.

Adding to the congestion is the fact that cargo-carrying trucks, passenger cars, busses, and pedestrians are not separated at Lebombo. Additionally, testing stations which identify positive coronavirus cases are closed for decontamination, a process that can take up to four hours.

And while the dire economic impact threatens the livelihoods of truckers and suppliers, the risk of Covid-19 spreading among travellers and into communities on either side of the border poses an even greater health concern.

According to freight associations monitoring the situation, several home affairs and port health officials have already been infected. With social distancing and mask wearing rarely enforced along the 25km backlog, Fitzmaurice and other stakeholders are concerned that these border delays may quickly devolve into “super-spreader” events, if they have not done so already.

This threat, amid a burgeoning second wave of coronavirus infections sweeping Southern Africa, is of particular concern to overburdened healthcare services.