Is Your Car Smarter Than You Are?

The computing power of the family car has grown exponentially. The question is: Do we like it? 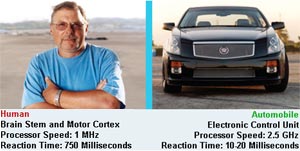 Early in December 2005, Debbi Dixon was running late for dinner, so the medical lab technician pushed her 2004 Subaru Outback a little harder than normal down Swanee Bean Road. “It was already winter here in Thetford, Vt.,” she says, “and the road was icy. I looked down to raise the heat, and when I looked up again, there was a deer right in front of me.”

Her instincts took over, and she jerked the wheel left and then right to avoid the animal. Instead of fishtailing wildly on the slick road, the Subaru remained stable. “The car’s stability control system saved me before I ever realized what was happening.”

Dixon is just one beneficiary of a quiet revolution in automotive technology. For decades, it was up to the driver’s skills and intuition to survey the environment and make the necessary adjustments to the steering, brakes and throttle to maintain control and avoid accidents. But gradually, over the past several years and without most of us noticing, that control has been migrating from the driver to the driven.

Antilock brake systems (ABS), which were introduced in 1978 and became widespread in the ’80s, marked the first of the car-overrides-driver technologies. And ABS laid the foundation for all the systems that have followed. Essentially, ABS works by using sensors to keep a central electronic control unit apprised of the rotating speed of each wheel. The processor regulates hydraulic pressure to apply maximum braking force without causing a skid. Building on that data and hardware, engineers increased the capabilities of the computer controls to create traction control in the ’90s and, soon after, electronic stability control (ESC). By applying pressure to individual brakes, ESC keeps the vehicle from either oversteering (fishtailing) or understeering (plowing) and keeps the vehicle stable. The next natural step in this progression was to equip cars with sensors and software that anticipate danger and react to it if the car decides that the driver is not doing enough to avoid an accident.

Wrapped in Safety
There is little question that the rise of computerized controls has made cars safer. A 2004 National Highway Traffic Safety Administration (NHTSA) study showed that ESC reduced all single-vehicle crashes by 34 percent and single-vehicle SUV crashes by 59 percent. A 2006 University of Michigan study found that ESC could reduce the odds of fatal rollovers in SUVs by 73 percent and in cars by 40 percent. “We’re projecting lifesaving benefits from ESC that we haven’t seen the likes of since the safety belt,” says Rae Tyson, spokesman for the NHTSA.

As technology continues to develop, the next logical step is to design a vehicle that decides if an accident is imminent and automatically takes drastic action to prevent it. For those who drive only by necessity, a vehicle that negotiates traffic and avoids accidents autonomously may be a blessing. But those who actively enjoy driving do not necessarily appreciate the forced oversight. “Autonomous vehicles hold no interest to me,” says PM contributing editor Jay Leno. “That’s called mass transportation. I enjoy being involved. When you drive a 1906 steam car and you have no brakes and it’s on fire, it tends to keep you involved.”

Meanwhile, new-car buyers have less and less say in the matter as the technology creep continues. The trend took a major step forward recently as the NHTSA proposed a new federal safety standard that mandates electronic stability control on all light vehicles by the 2012 model year. Once ESC is universal, the NHTSA estimates that it will save 5000 to 10,000 lives every year. “I think the fact that the driver isn’t involved in deciding how to get out of trouble is what makes ESC so effective,” says Susan Ferguson, senior vice president of research for the Insurance Institute for Highway Safety (IIHS).

Developing cars that provide the mandated safety systems while not estranging enthusiast drivers is a delicate balancing act for the world’s automakers. “We are not looking to develop vehicles that work like trains,” says Dr. Joerg Breuer, senior manager of active safety for Mercedes-Benz. “We’re developing safety systems that cut in only when critical situations occur-when we are absolutely certain that the driver needs some support.”

This type of systems integration allows manufacturers to build smarter cars. Electric steering systems get information from the ESC to help avoid an accident. And electronic dampers can minimize body roll for increased stability. “If I can remove some of the yaw error with the steering or suspension and not have to apply the ESC,” says Rich Marsh, director of vehicle control for General Motors, “the driver may never know we did anything.”

ESC is one part of an expanding active safety envelope. Cameras and radar add a whole new dimension. They can detect objects beyond the driver’s line of sight and, with the help of computers, gauge the speed of those objects more quickly and with more precision than any human. “If you get hit in a side impact, there’s about 6 in. between you and that incoming car’s hood ornament,” says Philip Headley, chief engineer for advanced technology at Continental, a major developer and supplier of automotive safety controls. “If the system’s camera can see the car coming, there’s more time to deploy the side airbags.”

A car with a blind-spot warning system relies on cam-eras and/or radar to tell the driver whether the area outside the mirrors’ field of vision is clear. If a lane is occupied, the system alerts the driver. Similar technology is used in lane-departure warning systems, which essentially act like virtual rumble strips. And, according to IIHS, road and shoulder rumble strips reduce crashes by 25 percent.

Lexus will debut an intelligent cruise-control system in the spring of 2007 that uses two forward-facing cameras along with millimeter-wave radar to detect not only large metallic objects in the road (like cars), but also smaller, fleshy ones-like humans. A third camera observes the driver’s face; if the camera sees the operator is not looking ahead at danger, the system sounds an alert. A Mercedes-Benz radar-based cruise control system can slow a vehicle by applying up to 40 percent braking power to maintain a safe distance. It can stop the car if necessary. However, programming the software to ensure that the car knows what the best action is in a situation can get muddy. As Headley cautions, “The driver’s intent may be to do a quick lane change right before he hits the guy in front. If the system applies the brakes, it may be the wrong move.

But What Does it All Mean?
Cars will get smarter and safer. But is the technology-laden car smarter than the average driver? More important, is it a better driver?

As we found, the answer is maybe, and maybe not.

To see how both expert and nonexpert drivers benefit from electronic stability control, Popular Mechanics tested three different types of vehicles, with and without stability control, on both wet and dry surfaces. Our results (see “Man (and Woman) vs. Machine” at right) show that in some circumstances computer control takes a back seat to the driver’s reflexes and skill.

“I found these stability control systems to be totally frustrating, especially on the wet surface,” says PM’s senior auto editor and lead test driver, Mike Allen. “Even with my foot pinned to the floor, they wouldn’t deliver the power; the systems just beeped at me. And though I went through the course without drama, I was generally able to go faster-and felt more in control-with the ESC off.”

We love driving and we love honing our driving skills. We also take pride in our ability to control a vehicle at its performance limits. Given the increasing numbers of high-performance cars at dealers and on the road, we know that we are not alone. But despite the legions of driving enthusiasts, as we look around us on the streets and highways, we realize that we are still in the minority. For the vast sea of everyday drivers, the proliferation of automotive safety computer controls is unquestionably a good thing.

But we’re also firm believers in personal choice, freedom and responsibility. So, we strongly think that if stability control-and future autonomous driving technologies-are going to be standard on every new car and truck, as mandated by the federal government, then the driver should be able to disable them when conditions allow and desires dictate.

As Nissan’s vice president of product planning, Larry Dominique, says, “There are times when you wish you could just close your eyes and let your car just take you where you want to go. But there are also times when you just really want to enjoy the thrill that comes with driving a car. And I hope that never goes away.” We couldn’t agree more.

Man (And Woman) Vs. Machine
We went to the test track with front-drive and rear-drive sedans with stability control systems that could be disabled. We also included two similar pickups-one with ESC, one without. Then we put the vehicles through our usual slalom and emergency double-lane-change tests, with and without the safety systems on. All tests were repeated on dry and wet surfaces by two “regular” drivers as well as by our usual professional test driver.

We fully expected our expert to do better without the help of stability control. We didn’t think our novices would, however. They fooled us.

In some circumstances, all of our drivers negotiated the course more quickly without the stability control. In others, only our experienced test driver did better. But the test numbers by themselves do not tell the whole story. While Mike Allen wasn’t always the fastest, he was always the smoothest without the benefit of ESC. With ESC off, our novices were often on the ragged edge of disaster-brushing pylons and sometimes almost spinning. In the real world those incidents could be serious accidents. As tester Dave Montanino pointed out after a run in the ESC-equipped pickup, “There’s no doubt that on a slick road without ESC, I would have spun out.” 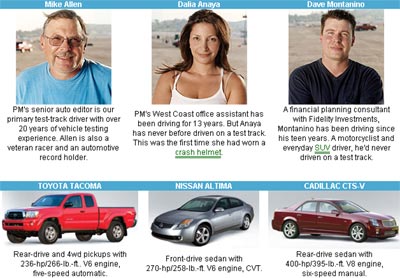 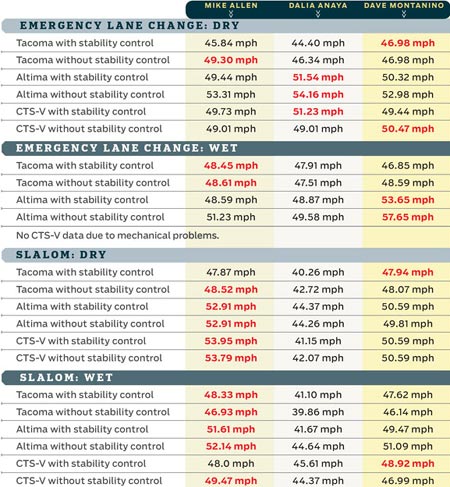 The Car That Can Drive Itself
It began with antilock brake systems (ABS). Wheel-speed sensors tell an electronic control unit when one wheel is not decelerating at the same rate as the others under braking. The control unit then directs a sophisticated hydraulic pump to ease the pressure to the offending brake to prevent that wheel from skidding.

For stability control systems, which the federal government has mandated for the 2012 model year, the electronic control unit determines that the car is not going in the direction that the driver wants it to by comparing wheel speeds, steering-wheel position and vehicle yaw. And if programmed to, the computer can apply braking force and reduce power.

Add radar and video cameras to correlate traffic conditions with the driver’s intent, and the control unit will be able to determine if the driver is doing the job properly. If not, the computer will take over to stop or steer the vehicle out of trouble.

Our illustration shows a hypothetical vehicle that includes all of these currently available systems. 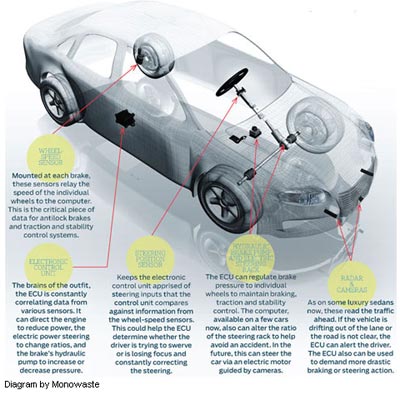