‘I get nothing at the end of the day’

‘I get nothing at the end of the day’ 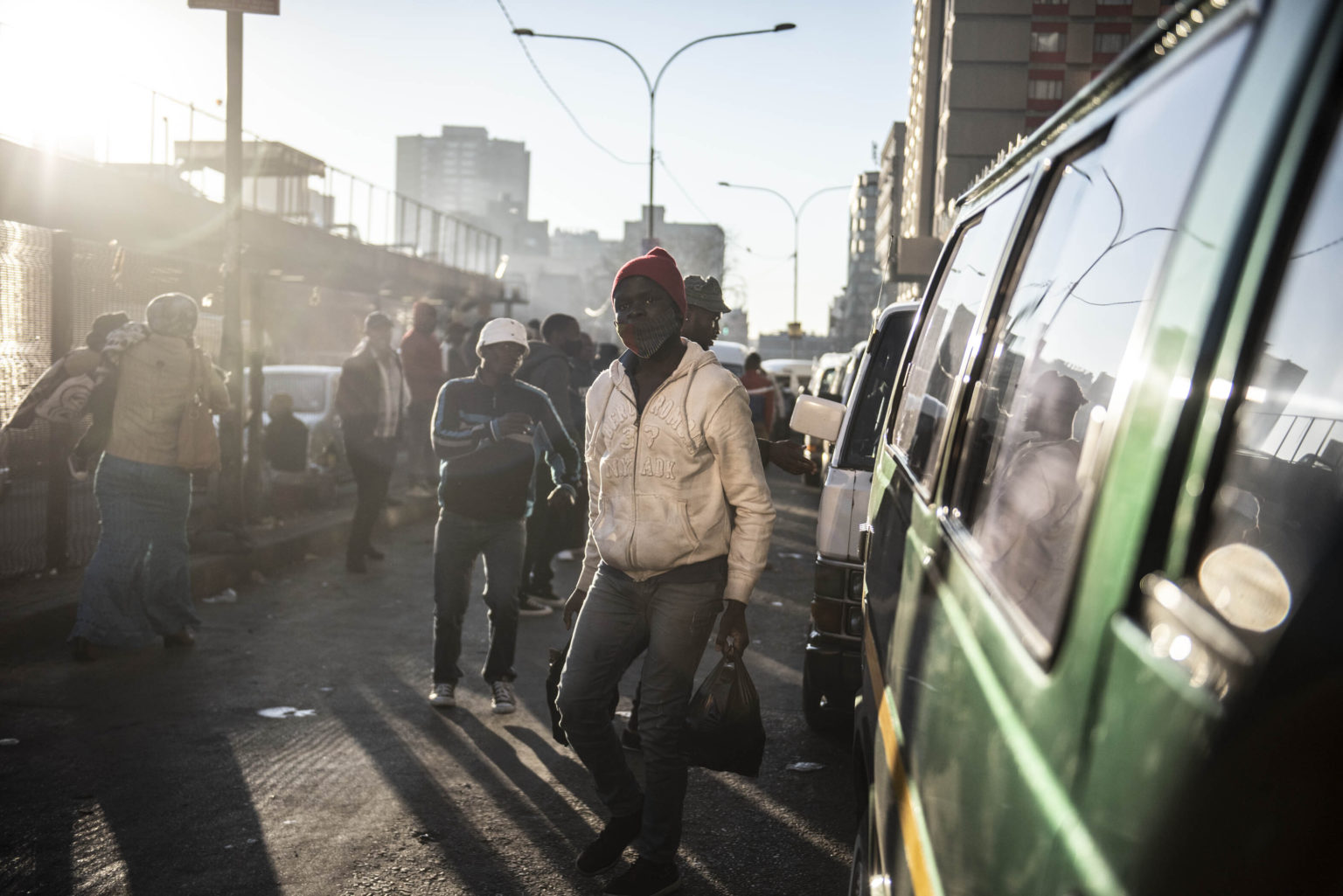 At 5am on Wednesday, Johannesburg’s central business district is already awake. A brigade of Quantums marches its streets, as workers and schoolgoers bob and weave between them. A yawn of exhaust fumes welcomes them as they arrive at the Noord taxi rank.

Adele Sithole sits motionless amid the throng, her body still adjusting to the sharp winter chill. The mother of three wakes up at 3am to make the trip by taxi from Soweto to Noord, where she sells fried fish and vetkoek to drivers and commuters.

This has been her morning ritual since 1996. “We come every day because we don’t have a choice. I would have nothing without this.”

But on Monday, Sithole stayed at home.

In its most recent standoff with the government, the Gauteng arm of the South African National Taxi Council (Santaco) called a taxi strike on Monday. Thousands of commuters were left stranded and Transport Minister Fikile Mbalula condemned the decision.

Taxi drivers say the constraints implemented to curb the spread of Covid-19 have made it near impossible to eke out a living, especially after handing over the lion’s share of their earnings to their bosses. Despite being the backbone of South Africa’s public transport system, taxi drivers — like the rest of the country’s informal workforce — have been left to fend for themselves.

Three days before Monday’s shutdown, Mbalula unveiled his department’s plan to soften the blow dealt to the taxi industry by the Covid-19 pandemic, which has forced operators to reduce the number of passengers in taxis to ensure physical distancing.

The decision to offer the industry a relief package of R1.135-billion was “not an easy one”, Mbalula said. “We literally had to scrape the bottom of the barrel to reach this amount, because we believe the taxi industry is deserving of support as the largest mover of our people,” the minister said in a statement.

Taxi drivers transport 15.6-million passengers a day. The industry accounts for 68% of South Africa’s public transport system. The relief set aside by the government will go straight to taxi operators to cover a portion of their lockdown losses.

“I get nothing at the end of the day,” Bheki Zondo says, bleary-eyed.

Zondo, who has been a taxi driver for 11 years, arrives at Noord taxi rank from Vosloorus, South of Boksburg, at 4am. He heads home at 7pm.

“How can I support my family if I can only have 10 people in the vehicle?” he asks, a matchstick balanced precariously between his lips. Zondo says, after paying for petrol and giving the taxi owner his cut, he takes home R200 a week.

“I feel bad. My family knows that right now I am at work. And they think that, because I am at work, I am making money. But I get nothing.”

Toky Buthelezi says he doesn’t blame the government for his predicament. “The plans they came up with to fight the virus — I think it’s for a good cause. Because people are going to die,” he says. Buthelezi leans out of the spotless Quantum to talk, the balmy heat inside a wall protecting against the morning cold.

But, he says, the government “should engage more with people on the ground”.

Buthelezi stayed at home on the day of the shutdown, surmising it would be too expensive to travel from the East Rand to Johannesburg “when there was already nothing in the tank”.

He says he has little choice but to keep going. “Everyone is suffering, Everyone, everyone, everyone … But what must we do? People everywhere are losing their jobs. Where else can we go? You have to stick with what you have right now.”

Siyabulela Fobosi, a PhD candidate at the University of Johannesburg who has published extensively on the taxi industry, says even at the best of times taxi drivers operate in “precarious working conditions”.

“Taxi drivers have always felt like they are exploited. They don’t receive decent wages. They don’t have payslips. They’re not registered with the UIF [Unemployment Insurance Fund] … When they try to become members of a trade union, they face intimidation from their bosses.”

Because the taxi industry is unregulated, drivers have been excluded from other efforts by the government to help workers during the nationwide lockdown, including the UIF’s Covid-19 benefit.

“It is situated between the two. Even though it is structurally situated in the informal sector, it creates links to the formal sector. It does so by taking people from the taxi ranks to their places of work, formal businesses. It also supports informal traders.”

Nomvula Mazibuko sets up next to a fruit stall. It’s the closest she can get to the taxi rank. The closer she is, the less likely the metro police will bother her, she says.

Mazibuko’s husband died in April. Having lost her income as a hairdresser, she decided to sell scones, which she arranges like big gold coins on a plate balanced on a bucket. But business is still slow. “People don’t have money. And some people are still stuck at home. They’re not even working yet,” she says. The smell of the ripe guavas at the fruit stall mingles with the stale cigarette smoke coming from the rank.

Mazibuko also decided to stay away on Monday. “Without the taxis, you can’t just go and do some small business. So we just stayed at home … But if I am not here for a day, there is no bread. So I must come.”

Globally, informal sector workers, such as street vendors and taxi drivers, have been hardest hit by the economic crisis triggered by Covid-19. In South Africa, the informal sector was largely left out of early government relief plans.

Mbalula has suggested that the relief offered by the government to the taxi industry be seen as a step towards its formalisation.

In a meeting with Parliament’s transport portfolio committee earlier this month, the minister said: “Government will no longer just give a blank cheque on anything. We want a partnership. And that partnership which we will bring to the table will involve subsidy. But equally, it will involve the formalisation of the taxi industry.”

The middle of nowhere

On Tuesday, Santaco spokesperson Thabiso Molelekwa said formalisation “is not the issue at hand”.

“The issue at hand is how do we assist these guys who are distressed to survive the next six months,” Molelekwa told the Mail & Guardian.

“Government has so little appreciation for the role the industry plays. The movement of people across the country is not our responsibility. What we are doing is government’s work. And we are not getting subsidised for it.”

Molelekwa disputed the view that Santaco is furthering the interests of taxi owners only.

“You remember that we see ourselves as a community business. In other words, we live because the community is there. The community lives because we are there. So it would be unfair to even think that we are pursuing our own interests at the exclusion of drivers.”

But some don’t agree with Santaco’s position. One driver who asked not to be named says he did not support the shutdown. “What was it for? We can fight. We can cry. It won’t help … There is nothing we can do. Even the government can’t do anything,” he says. “If the government is offering help, we must take it. Because it is not their fault this is happening. But I think they are offering it to the owners. We as drivers will get nothing from that. That’s how it is.”

He adds: “I can’t even explain how I feel. It is like we are stuck in the middle of nowhere with no money. No food. No money for rent. You see now: we are going to start eating each other now.”

His voice strangled by his mask, the driver says he is “depressed”.

“It’s like, even if I could die today, it is better for me to die.”