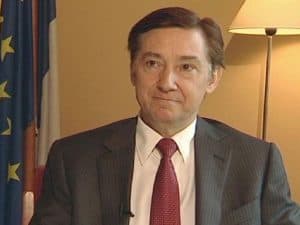 As improved France-Nigerian diplomatic relations spurred trade increase between the two friendly countries resulting in over N750 billion (1.8 billion Euros) in the first quarter of 2017, efforts are also being made to develop more economic exchanges to the benefit of both nations, the French Ambassador to Nigeria, Mr. Denys Gauer has revealed.

To this end, Gauer stressed that this has made Nigeria France’s first commercial partner in sub-Saharan Africa, adding that recently, Business France, an agency in charge of assisting French companies abroad, opened an office in Lagos to strengthen the effort.

Delivering a lecture with the theme: ‘The Influence of French and Francophone Policies in Nigeria’ at the Federal University Ndufu-Alike, Ikwo (FUNAI) – French Government collaboration held at the University’s Auditorium in Abakiliki, Ebonyi State recently, the Ambassador described Africa as a land of economic opportunities, hence the launch in 2013 the AfricaFrance Foundation meant to encourage the deepening of economic relations and the development of human capital.

He further maintained that France’s relationship with Africa and Nigeria in particular covers a wide range of areas, from security through human rights and development to business, adding that in a globalised world all countries face same challenges, so “it is a common responsibility to turn them into opportunities rather than letting them degenerate into threats”.

“Thirty-seven per cent of France’s 8.6 billion Euros aid goes to sub-Saharan Africa, making it the first recipient of our funding. The French development agency has been active in Nigeria for ten years only, but its activity has been expanding rapidly. In 2017 alone, it will have invested around 350 million Euros – that is approximately N150 billion – in this country, mostly soft loans to both the federal and state governments and the private sector.

“We have been working, among other things on improving energy and water infrastructure through the Transmission Company of Nigeria (TCN) and the Urban Water Sector Reform Program; providing better transportation by renovating more than 1000 kilometres of rural roads and funding the Lagos bus Rapid Transit System; and helping the small and medium sized enterprises through credit facilitation, in relation with the Development Bank of Nigeria and Access Bank”, he said.

On France’s partnership with FUNAI, the Ambassador noted that his interest was to have an exchange with students of the University since the youths remain the key to cope with those challenges so that they can also seize the opportunities to overcome such threats.

The Ambassador, who was visiting Ebonyi State for the first time, expressed happiness that it was the partnership the university initiated with the French embassy that had made the visit possible, indicating that over the past two years of the partnership, French government had given 35 scholarships to students and staff members of the university to pursue Masters or doctorate degree programmes.

“Through an agreement signed in January 2016, FUNAI, TETFUND and the French government have delivered or are about to deliver 35 scholarships, enabling as many trainees to pursue master or PhD studies in the best French universities in Paris, Marseille, Toulouse, Strasbourg, Dijon or Grenoble. The first group of students and junior lecturers has already left, and two others will soon follow. In a few years, they will come back to contribute to the development and success of this university, and beyond.

“You may not know that 250,000 foreign students choose France every year, of which 100,000 hail from Africa. We are the fourth host country in the world, and the first for Africa students. Yet, only a handful comes from Nigeria. It is all the more gratifying to see that FUNAI has decided to send its promising staff-in-training to France. And it makes a lot of sense, because in France, you can study engineering, mathematics, humanities or social sciences at the highest level and at the same time learn the language of your francophone neighbours”, he stated.

The facilitator of the programme, Dr. (Mrs.) Nnenna Nwosu-Nworuh, who is also the Head of Department of Languages said she was highly excited for the visit, adding that it was her dream come through, and commended the Vice Chancellor for ensuring that the institution maintains excellence in academics and morals.