John Nelson and Brian Masson, Centre for Transport Research, University of Aberdeen, UK, describe the FLIPPER initiative which is intended to improve the provision of flexible transport services.

In an ideal world public transport would be as convenient as private transport, suggesting that all public transport should be demand responsive. The term Demand Responsive Transport (DRT) has been increasingly applied in the last 10 years to a niche market that replaces and feeds (usually via small, low-floor buses or taxis) into conventional transport where demand is low and often spread over a large area.

Historically, DRT evolved from door-to-door dial-a-ride services (sometimes referred to as Special Transport Services (STS)) provided by statutory authorities and community groups for restricted usage (usually the disabled and elderly). Interested users would telephone in their requests some days before they intended to travel and the operator would plan the service manually the day before the trip. These traditional services have often been criticised because of their relatively high cost of provision, their lack of flexibility in route planning and their inability to manage high demand.

Many of the earlier limitations have subsequently been overcome through the introduction of transport telematics and the development of a much broader definition of Flexible Transport Services (FTS) which is discussed below. As long ago as 1992, for example, the City of Gothenburg in Sweden invested in PLANET, an advanced DRT system for STS, and a fleet of shared-ride taxis and specially equipped vans.

Telematics-based DRT services have the scope to bring public transport closer to the flexibility and convenience of private transport, whilst retaining the fare levels associated with fixed-route, registered services rather than the more flexible – but costly – private hire and taxis.

Flexible transport services
Telematics-based DRT systems are based upon organisation via Travel Dispatch Centres (TDCs) using booking and reservation systems which have the capacity to dynamically assign passengers to vehicles and optimise the routes. Automated Vehicle Locationing (AVL) systems are used to provide real-time information on the status and location of the fleet for the route optimising software; it is not uncommon for one software supplier to have products for both the taxi and DRT markets.

Flexible Transport Services (FTS) is an emerging term which covers services provided for passengers and freight which are flexible in terms of route, vehicle allocation, vehicle operator, type of payment and passenger category. The flexibility of each element can vary along a continuum of demand responsiveness (Figure 1) from services where all variables are fixed a considerable time before operation (such as a conventional public transport bus route) to services whose constituent variables are determined close to the time of operation. Taxi services typify the demand responsiveness of public transport. 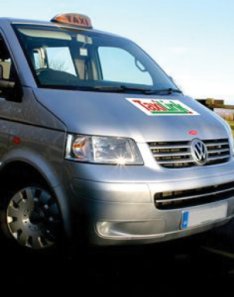 LinkUp in Tyne and Wear in the North-East of England is a typical open-access FTS. Services operate a fully flexible route in a predefined area with fixed timing points to provide journeys at times when regular services are not operating or where direct services are not available. Passengers are picked up and set down at the meeting points which are all existing bus stops and predefined places such as shopping centres, doctors’ surgeries and leisure facilities. The service also picks up and drops off passengers at any doorstep for a small additional fare, if requested and possible. It is necessary to pre-book the service at least 45 minutes before travelling.

An interesting recent development which has been enabled by the application of telematics is the move to integrate STS with other forms of FTS in a joint operation. For example, Nexus (the Tyne and Wear passenger transport executive) now combines operating contracts for its Care Service and the LinkUp services which are dispatched via a common dispatch centre under a single brand. This service is supplemented by TaxiLink which provides a door-to-door service using accessible taxis for users with greater mobility difficulties (Figure 2).

Similar but more extensive developments have occurred in the Netherlands. This followed a government initiative there to promote a combination of mobility services for users with special needs and ‘open’ DRT services for everybody, filling in the gap which existed between mainstream public transport and conventional exclusive ride taxi services.

RegioTaxi, a combined community transport, STS and open shared-ride taxi service for non-eligible users has become very popular and since start-up in 2000 RegioTaxi KAN in the Arnhem-Nijmegen region has grown to carry almost 1.4 million passengers per year. About half of the users are eligible for a higher subsidy and half are the general public paying a larger portion of the transport cost. Their fare is still about half of that for a corresponding exclusive taxi ride. Similar developments can be seen in Denmark, although on a much smaller scale.

Figure 3 shows the structure of the FAMS (Flexible Agency for collective Mobility Services) business model for FTS. FAMS, a European Union (EU)-funded project, tested the concept of a virtual agency to coordinate multimodal DRT service delivery at sites in the Angus region of Scotland and in Florence in Italy. The project provided valuable evidence to demonstrate that technologies such as GSM, GPRS, SMS, real-time scheduling and dispatch technologies could provide improved services in high-density urban and low-density rural areas. 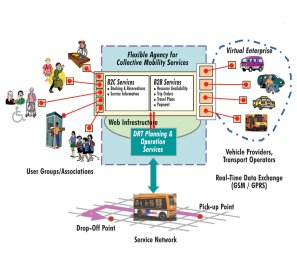 The FLIPPER initiative
FLIPPER, Flexible Transport Services and ICT platform for Eco-Mobility in urban and rural European areas, is a new initiative funded via the EU INTERREG IVC programme. FLIPPER will focus on the capturing of best practice for a wide range of flexible transport options which are better tailored towards the needs of individual communities in cities, small towns and rural areas. The potential for services such as door-to-door bus travel, shared taxis and car clubs will be examined in the project, which brings together 11 local authorities, transport operators and universities from nine EU regions.
A particular aspect of FLIPPER will be to look closely at the environmental benefits of more flexibly organised fleets using smaller vehicles.

It is hoped the three-year project (which runs until August 2011) will result in a greater understanding of the technological, organisational and operational requirements for the introduction of alternative flexible transport options at both regional and international levels. By drawing on high-level expertise from across the EU, the intention of the project is to share knowledge between the regions about the kind of results, research and experiences which has already been gathered. The consortium will use this information to build a clear picture about the kind of eco-sustainable and socially beneficial transport which could considerably enhance the status of public transport as a viable alternative to the private vehicle.

The FLIPPER initiative is led by the public transport company of Bologna. The Centre for Transport Research at the University of Aberdeen will act as the research partner providing expert advice to a variety of operators and authorities in Ireland, Italy, Greece and Portugal who will develop a series of feasibility studies and pilot projects during the course of the project.