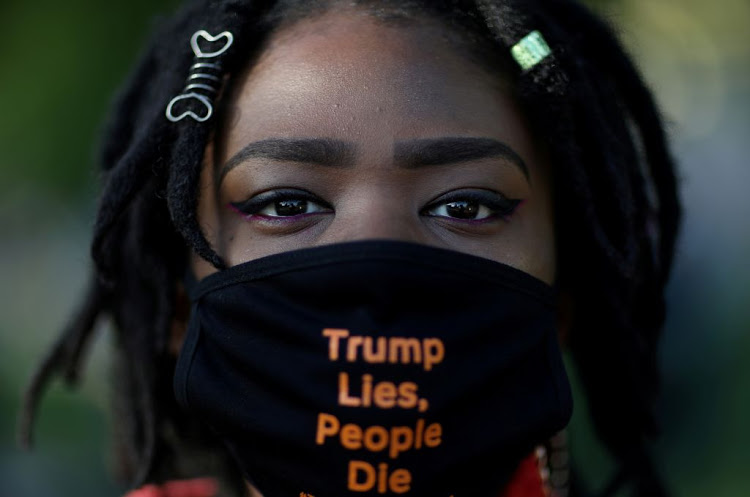 Two more nurses die of Covid-19 in the Western Cape

Two more nurses died of Covid-19 complications on Thursday, bringing the number of nurses who have succumbed to the disease in the Western Cape to five so far.

Registered nurse Nandipha Kambi of Gugulethu died at Vincent Pallotti hospital after three weeks on a ventilator. She was a community screening manager for Cape Town non-profit organisation In The Public Interest (IPI), which does community screening for Covid-19 and chronic medication home deliveries.

Over 300,000 pupils are expected to return to schools across the province, education MEC Panyaza Lesufi said on Thursday.

Pupils will go on break at different times and designated eating areas will be provided.

These are some of the measures that the Gauteng education department says it will put in place when children go back to school.

The department on Thursday outlined its plans to commence with the academic year ahead of the opening of schools for grade 12 and 7 pupils on June 1.

‘We are desperate’: Gauteng informal traders battling under lockdown

A non-profit organisation representing thousands of informal traders in Gauteng on Thursday called on the government to open up the economy to allow them to work and feed their families.

“We are desperate to resume trade so that we can put food on the table for our families and regain our dignity,” said the Johannesburg Informal Traders Platform (JITP).

It also expressed concern over an alleged lack of consultation by the government.

“They are deeply concerned that government has not consulted them to understand the impact of the lockdown on their livelihoods,” said spokesperson Ntakuseni Tshikosi.

Economic Freedom Fighters Statement on the Re-opening of Schools and Sectors of the Economy. 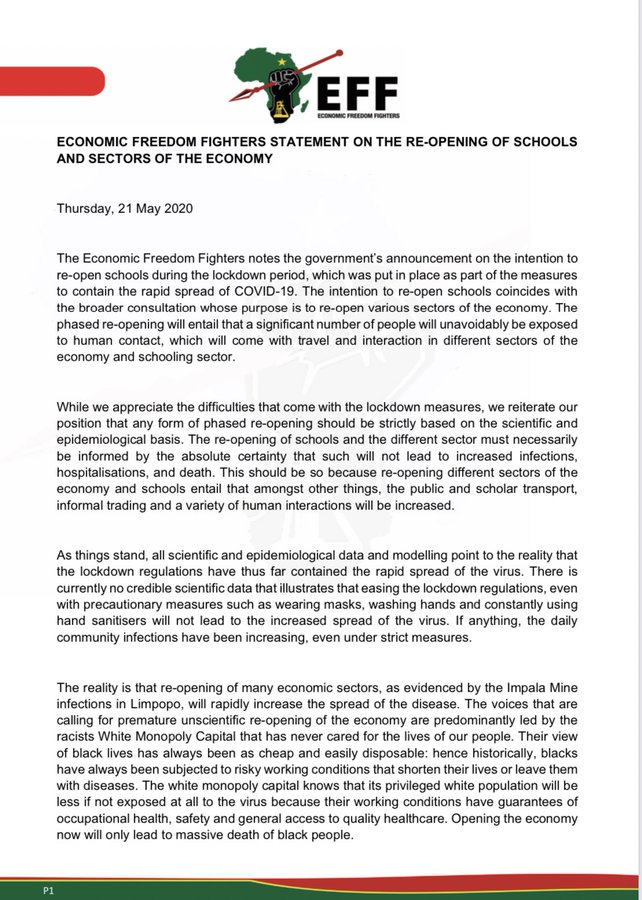 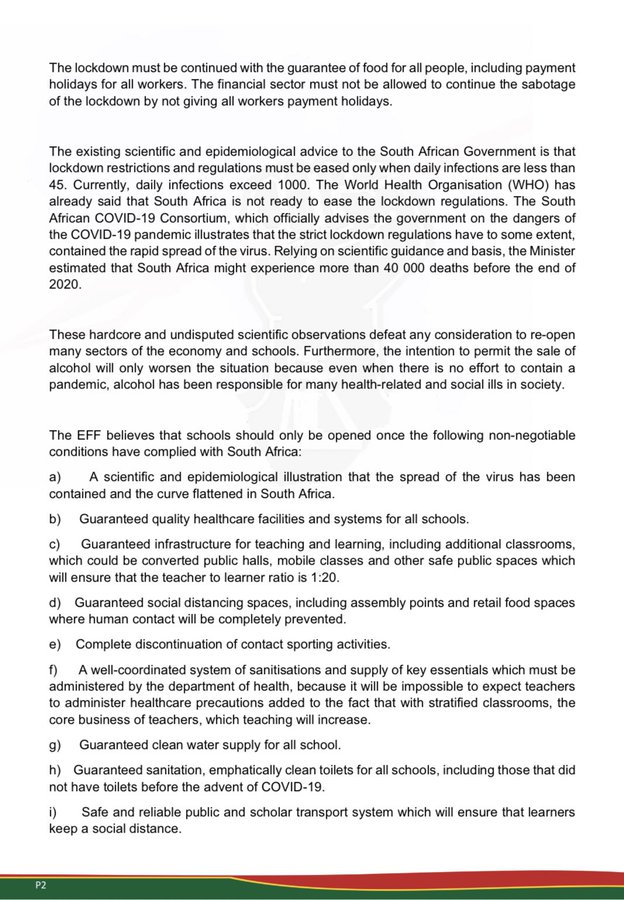 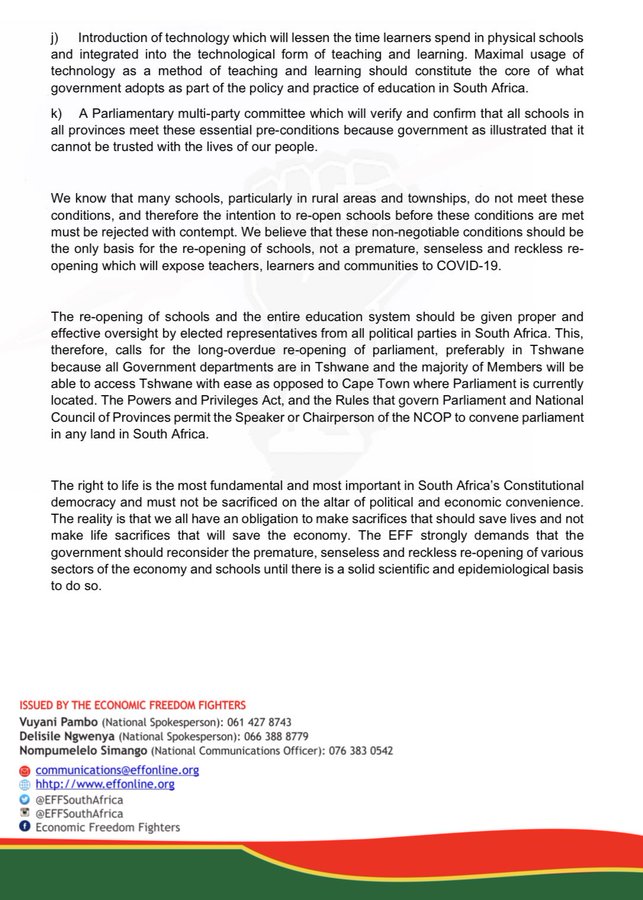 417 people are talking about this

Uber has spent $19m on coronavirus financial assistance for drivers

Uber Technologies Inc on Thursday for the first time detailed how much it has spent to support its ride-hail drivers and food delivery workers during the coronavirus crisis, which has battered the company and forced it to lay off thousands of employees.

The company said  it had spent $19m as of mid-May in direct two-week financial assistance to a total of nearly 48,900 drivers worldwide who were infected by the virus or ordered to quarantine.

Half of that amount was paid out to 12,350 drivers and delivery workers in the US and Canada, Uber’s largest market and where it has around 1.3-million drivers.

Michael Cohen, US President Donald Trump’s former personal attorney, returned to his New York home on Thursday after being released early from a federal prison due to concerns he could be exposed to the novel coronavirus there.

Cohen, 53, had completed a bit more than a year of a three-year sentence for his role paying hush money to two women – pornographic film star Stormy Daniels and former Playboy model Karen McDougal – who said they had sexual relationships with Trump, as well as for financial crimes and lying to Congress.

Wearing a white surgical mask, blue jeans and a dark blazer, Cohen emerged from a Mercedes and walked into his Manhattan apartment building without responding to questions from waiting journalists.

He is expected to serve the rest of his sentence in home confinement, according to two sources familiar with the case, who spoke on condition of anonymity.

Mamelodi Sundowns coach Pitso Mosimane has expressed reservations about a proposed plan to accommodate all the topflight and lower tier clubs in a massive camp as a precursor to the restart of the season.

TimesLIVE reported this week that the Premier Soccer League (PSL) is to propose a plan to the government that could see all 32 clubs – the 16 Absa Premiership and the 16 GladAfrica Championship – accommodated in a massive camp in a bid to complete the season that was interrupted by the Covid-19 outbreak in March.

But Mosimane‚ who has never been one to mince his words‚ questioned the practicality of housing 32 teams in one major base camp.

Ramaphosa told us he is under ‘great pressure’ to open the economy, say opposition leaders

President Cyril Ramaphosa is said to have told leaders of opposition parties that he was under “great pressure” from business and organised labour to open up the economy and move as quickly as possible to lower levels of the lockdown regulations.

Two party leaders who were part of the virtual meeting with Ramaphosa on Wednesday said the president informed them of pressure from the National Economic Development and Labour Council (Nedlac) to open up the economy, with business leaders having apparently proposed that the country should move directly to level 2 as the economy was taking a huge beating.

“He said there is pressure at Nedlac to move to level 2 and level 3, but business was saying you have to open up beyond level 3, and unions are also putting pressure to open the economy,” said an opposition leader who asked not to be named.

Global infections from the novel coronavirus passed five-million on Thursday as the pandemic played out unevenly across the planet, with China eager to declare a victory, Europe tentatively emerging from its shell and deaths still rising in hotspots in Latin America.

The grim milestone comes after known cases of Covid-19 doubled in just one month, according to AFP data collected from official sources, with the death toll now topping 328,000 worldwide.

While many hard-hit European countries have significantly turned the tide on new infections and fatalities, Latin America is in the grip of an infection surge. Brazil is leading the pack, logging the third-highest number of cases in the world after the US and Russia.

Gauteng is increasing its stock of personal protective equipment (PPE) in anticipation that the “time ahead is going to be tough”.

Premier David Makhura said on Thursday that the total number of confirmed Covid-19 cases in the province as of May 20 was 2,400, with 1,729 recoveries and 27 deaths.

The SA Reserve Bank cut interest rates by 50 basis points on Thursday which is expected to bring further relief to SA’s battered economy, most of which is still under lockdown.

The cut takes the benchmark rate to 3.75%, its lowest level since the repo was introduced in 1998, BusinessLIVE reports.

In a statement, health minister Dr Zweli Mkhize said the number of confirmed Covid-19 cases in SA has climbed to 19,137 by Thursday. This was a 1,136 jump from Wednesday’s tally.

Rentals will suffer after lockdown, ‘especially at lower end’

Lower-income households are taking a big hit from the weakening economy of the past five years, with their ability to pay rental diminishing.

This is according to FNB property sector strategist John Loos.

Loos said it was likely that the relative pressure of the deepening Covid-19 economic fallout would be felt more at the lower end of the rental market than at the higher end.

SA is going to run out of ICU beds, and it could be as early as June.

And the situation would be have been a lot bleaker without the lockdown, which reduced the transmission of Covid-19 in the country by between 40% and 60%.

Critical patients on average require six days in a hospital ward plus another 10 in ICU if recovery happens. Should they die, it usually happens after six days in ICU.

A limited number of MPs will return to parliament next Wednesday as the National Assembly is scheduled to hold a three-hour virtual sitting for MPs to pose oral questions to the executive.

The assembly’s programming committee finalised logistics on Thursday morning on what would be the first such plenary session for the assembly’s 400 MPs. It will be a question session to the social services and the governance cluster ministers.

The committee adopted a hybrid model where no more than 100 MPs will be physically present in the chamber while the rest connect virtually on Zoom.

‘Concerned citizens’ off to court to challenge lockdown regulations

group of “concerned citizens” has filed an urgent application at the high court in Cape Town challenging the constitutionality of the national coronavirus command council (NCCC) and the validity of the lockdown rules.

“Each of us have had our freedom curtailed by the regulations. We no longer enjoy the freedom to move around as we please, to eat and drink what we want, to work and study as usual and to visit our friends and families,” the group said in a statement.

MULTIMEDIA | The best of our coronavirus coverage so far

The worldwide emergence of Covid-19 has created unprecedented responses around the world not seen for more than a generation.

Globally, more than 5-million people have been infected by Covid-19 and already 320,000 people have lost their lives.

In SA, thankfully, we seem to have got a handle on the pandemic, thus far, when compared with some other countries.

‘Is it time for a modified approach?’: Gift of the Givers’ Imtiaz Sooliman

Areas and provinces that are considerably free of Covid-19 should resume full-scale economic activity once it has been deemed safe to do so in terms of the containment of minimal infection, suggests Gift of the Givers founder Dr Imtiaz Sooliman.

‘We were told to stay home but now we are starving,’ community cries

A queue snaked around the Makhaza sports ground in Saulsville, Pretoria, through to the main road on Thursday morning as hundreds of people from Jeffsville informal settlement and neighbouring areas queued in the hope of receiving food parcels.

Some camped at the ground the whole night, while others arrived in the early hours of the morning. Mothers queued with toddlers strapped to their backs.

‘There can be no justification for torture, ever’: top brass directive to police

In apparent compliance with the Pretoria high court ruling in the Collins Khosa “lockdown brutality” case, the police commissioner has sent out fresh, detailed guidelines on how the SA Police Service (SAPS) and municipal police must conduct themselves. It directs that “there can simply be no justification for torture, ever”.

The directives caution against “serious and humiliating rights infringements” by arresting and detaining people for lockdown breaches where their attendance at courts can be done through summons or other less intrusive means.

This as pupils in grades 7 and 12 are expected to return to schools on June 1, after a two-month hiatus brought on by the lockdown.

‘No one has received any help’: Foreign nationals flagged as most needy in Pretoria

Residents of Iterileng informal settlement, near Laudium, Pretoria, flocked to a local stadium as early as 3am on Wednesday in a bid to get their share of 11,000 food parcels distributed by local groups.

Some bought their own chairs and crates to sit on while they endured the snaking queues to the stalls.

Volunteers moved around the crowds to ensure compliance with regulations such as social distancing, which in some instances proved to be a challenge.

The South African Informal Traders Alliance (Saita) and a tobacconist have warned that the ban on the sale of cigarettes is fuelling illicit trade.

The organisations are calling on the government to “urgently” lift the ban on the sale of tobacco.